Cabinet meeting put off as Nidhi, Thapa dispute puts PM in a dilemma 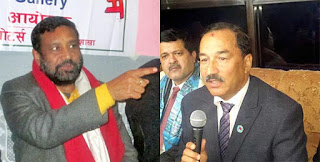 Prime Minister Pushpa Kamal Dahal failed to hold the meeting of his Cabinet due to dispute between two of his deputies Bimalendra Nidhi and Kamal Thapa, over protocol.
The meeting of the Council of Ministers was scheduled for 5:00pm today. Both deputy prime ministers — Nidhi and Thapa — have claimed the senior position in the cabinet. Sources at the Prime Minister’s Office said Prime Minister Dahal held separate meetings with Nepali Congress President Sher Bahadur Deuba as well as Thapa, who is chairman of Rastriya Prajatantra Party and was recently inducted in the Cabinet, in a bid to sort out the dispute. The meeting, however, did not yield any result.
Dahal, who is embarking on a visit to  China tomorrow, is in great dilemma about whom to appoint acting prime minister. A source said Nidhi threatened to quit if he was not made second man in the cabinet. He also reminded the PM and NC President Deuba about the agreement signed between the two parties while forming the government. “The two parties had agreed to give seniormost DPM to another party in the cabinet,”said Nidhi’s press adviser Ramji Dahal. The NC is the main ruling coalition partner in the cabinet.
Dahal had inducted DPM Thapa in the cabinet a few days ago after the United Democratic Madhesi Front, an alliance of agitating Madhesi parties, threatened to withdraw support to the government. Thapa claimed to be seniormost, as he was DPM in previous governments.
Dahal said Nidhi claimed the senior-most position and demanded he should be made acting PM during the PM’s china visit, as he had already been given such a responsibility. He said Krishna Bahadur Mahara was appointed DPM prior to Nidhi, but the latter was treated as senior in the cabinet and given acting PM during the PM’s foreign visit, as per the agreement between the two parties.
Share !
Share it
Share it
«